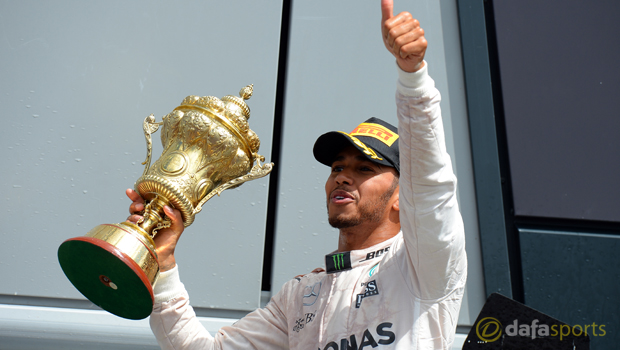 Mercedes star Lewis Hamilton says he is feeling at the peak of his powers right now and is confident of taking the momentum from Sunday’s victory into the next outing in Hungary.

Hamilton produced a near-perfect performance across the three days at Silverstone and all but wiped out the championship lead of team-mate Nico Rosberg.

The 31-year-old started from pole position and, despite a safety car coming out for the start of the Grand Prix, he managed to clinch a fourth win of the season.

He also became the first British driver to win four races at Silverstone and the first from any country to claim three in a row, having triumphed in 2014 and 2015.

The defending world champion, who is aiming for a fourth Drivers’ Championship, has now reduced the deficit to leader Rosberg to just one point.

Hamilton certainly appears to have the mental edge and momentum as the campaign reaches the halfway stage, and he admits he feels in great form at the moment.

“I do feel at my strongest right now. I’m just going to make sure I arrive at (Hungary) the same,” Hamilton told Sky Sports F1.

“We have our ups and downs and our dips, but energy, physically I feel I can go again.

I’m ready to go!” Next up is the Hungarian Grand Prix on July 24 and Hamilton, who is now 1.36 favourite to win the world title, will be eyeing more success.

Rosberg, who has picked up just one win from the last six outings, is a 3.30 chance to pick up his first trophy.

Ferrari’s Sebastian Vettel, who could only finish ninth at Silverstone, is a big outsider at 81.00 to get the better of the Silver Arrows pair.