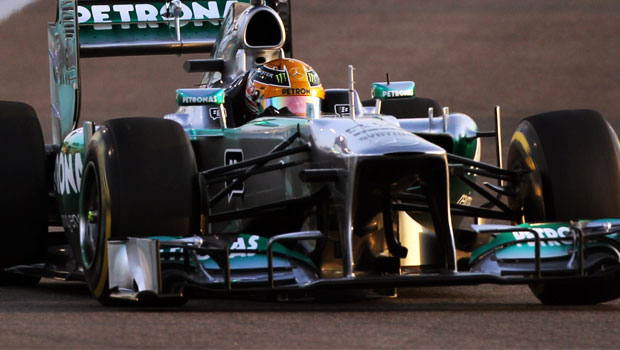 Lewis Hamilton says he cannot explain his lack of pace in the Abu Dhabi Grand Prix and is hoping for improvements to his Mercedes car over the winter.

Hamilton was in contention for pole position until a mistake in qualifying resulted in him taking fourth position on the starting grid.

Even so the signs were encouraging and Hamilton was confident of contending for at least a place on the podium, which makes his seventh-place finish even more baffling.

“It’s very confusing,” he said. “I was half a second up on my [qualifying] lap. If I hadn’t have made a mistake I’d have been on the front row.

“But when I get to the race I don’t know what happens. I really struggle.”

Hamilton’s fastest lap was just a second slower than his team-mate Nico Rosberg, who finished third, but the Englishman ended up going backwards. He did get caught in traffic after making his first pit stop but says that did not make any difference.

“Even if I wasn’t in traffic I wasn’t fast enough. Even if I was ahead I would have been overtaken, I just wasn’t good overall.”

Hamilton is now hoping improvements can be made to the car so they can be more competitive next year.

“I’m just hoping, with the tyres and the car, we can do some work over the winter and make the car work for me a bit better,” he said.