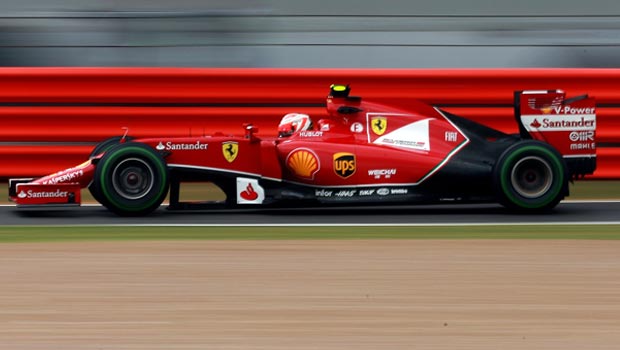 Kimi Raikkonen’s struggles with Ferrari seem set to continue as he will miss the mid-season testing at Silverstone due to injury.

The Finn returned to the team ahead of the 2014 campaign but he has failed to match his previous exploits, having landed the 2007 Drivers’ Championship with the Scuderia.

Raikkonen has been consistently outscored by team-mate Fernando Alonso and has just 19 points on the board to date.
The 34-year-old was involved in an horrific crash on the opening lap of the British GP on Sunday.

Raikkonen ran wide heading into turn five and as he returned to the track he caught the lip of the circuit, which sent him out of control and he suffered a 150mph, 47g impact into a metal guardrail.

After hitting the barrier Raikkonen bounced back on to the track where he was hit by Felipe Massa of Williams. The Ferrari star had to be helped from his car and limped away with the aid of a marshal but remarkably Raikkonen sustained only bruising to his left knee and ankle.

Ferrari have now decided Raikkonen will miss the mid-season tests as a precaution to ensure he is fit for the German GP at Hockenheim on July 20.

Raikkonen will be replaced by test driver Pedro de la Rosa on Tuesday, while Frenchman Jules Bianchi is set to deputise on Wednesday.

Bianchi, 24, is driving for Marussia this season but he has been a member of the Ferrari driver academy programme for the last four years.

Alonso, who is 78 points behind current championship leader Nico Rosberg, is 201.00 to win the Drivers’ Championship this season.

Mercedes star Rosberg can be backed at 2.20 and defending champion Sebastian Vettel of Red Bull is 81.00.