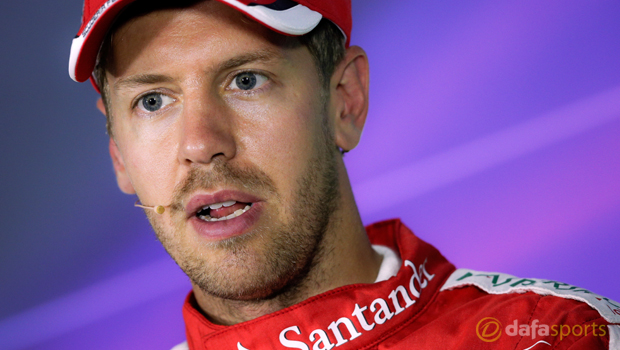 Sebastian Vettel has declared himself pleased with Ferrari’s form ahead of the Mexico Grand Prix this weekend and has vowed to keep pushing as the team continues to develop.

The Maranello-based outfit endured a miserable 2014 campaign, in which they failed to win a single race, and they ended up fourth in the Constructors’ Championship behind Williams, Red Bull and Mercedes.

It has been Mercedes that have dominated over the past two years, with Lewis Hamilton clinching a third world title after winning in the US on Sunday.

However, despite losing out to the Brit for a second consecutive year, Vettel is pleased with the progression made in his debut campaign in the famous red colours.

The German has won three times in Malaysia, Hungary and Singapore and the gap has been closed considerably to Mercedes, who have shown some signs of weakness this time round.

Ferrari will be keen to keep improving in the final few races and next up is an outing in Mexico, which returns to the F1 schedule for the first time since 1992.

Vettel, who is currently second in the standings, is priced at 1.50 for a top-three finish at the Autodromo Hermanos Rodriguez and he admits the team are set on challenging right until the end next season.

He said: “The target is definitely to come back stronger next year and just to keep making progress. I think that’s the best medicine that we need to prescribe to us.”

Hamilton is firm favourite at 1.50 to win in Mexico while team-mate Nico Rosberg is a 3.75 shot. Vettel is slightly longer odds of 9.00 with next challenger Valtteri Bottas at 34.00.