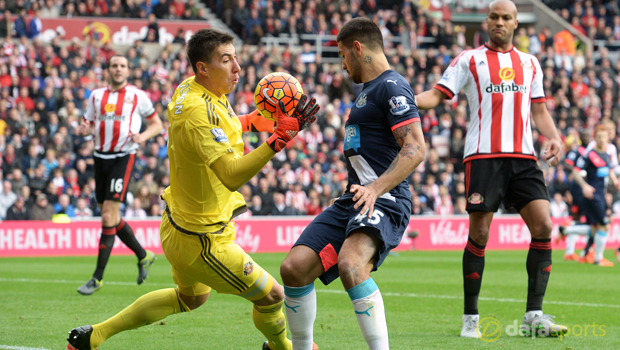 Costel Pantilimon insists Sunderland must use the recent derby victory over Newcastle to their advantage and start putting an impressive run together.

The Black Cats secured their first three points of the season at the Stadium of Light on Sunday against their fierce rivals, with goals from Adam Johnson, Billy Jones and Steven Fletcher helping the hosts to a 3-0 triumph.

It was the sixth consecutive derby win and it was the first success for new manager Sam Allardyce, who was appointed as the new head coach following the resignation of Dick Advocaat before the international break.

Sunderland’s performance was not the most convincing and had it not been for a controversial penalty in first-half stoppage time, which also saw Fabricio Coloccini sent off, the end result may have been different.

Victory has lifted the team off the bottom of the Premier League to 18th place and the next challenge is an away trip to Goodison Park on Sunday to face Everton.

The last four times the Black Cats have won the derby they have lost their next game and Pantilimon, who has been one of the best performers in the squad this term, insists his side must focus for the Toffees clash.

“We have to learn from the past to be more focused and concentrate on the next game,” he said. “We enjoyed Sunday, but we’re already thinking about the next game.

“One win is not enough. We have to continue like this. We have to learn from the past, to be more focused and concentrate on the next game. It’s important for the group to have a good run now.”