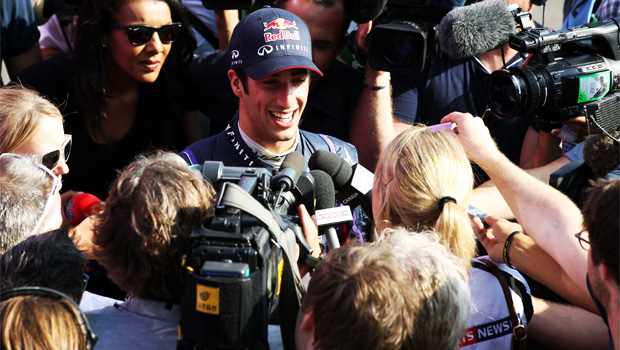 Red Bull are expecting Daniel Ricciardo to be challenging Sebastian Vettel next season after the Australian was named as team’s new driver.

The 24-year-old will be replacing fellow countryman Mark Webber, who is leaving F1 for sportscar racing with Porsche, and team principal Christian Horner has high hopes for him.

Ricciardo has been driving for Red Bull’s junior team Torro Rosso during the last two seasons and Horner believes he has earned his place with some impressive performances.

“We expect him to challenge Sebastian,” Horner revealed.

“He’ll get the same chance, the same equipment and it will be down to what he does on the circuit that counts at the end of the day.

“Daniel has really earned his place in the team. He tested really impressively with us earlier in the summer and obviously we have been keeping a close eye on his performances in Torro Rosso and therefore it was logical to give him a drive.”

The Australian has been tipped to have a bright future since winning the Formula 3 championship in 2009 before going on to make his Formula 1 debut at the British Grand Prix in 2011.

Ricciardo, who was born in Perth, will now get his chance to shine on the big stage with Red Bull and Horner believes he has all the attributes to be a star.

“He’s a really exciting prospect,” added Horner. “He’s got a good character and personality, he’s always got a smile on his face, but most importantly he’s seriously quick.”