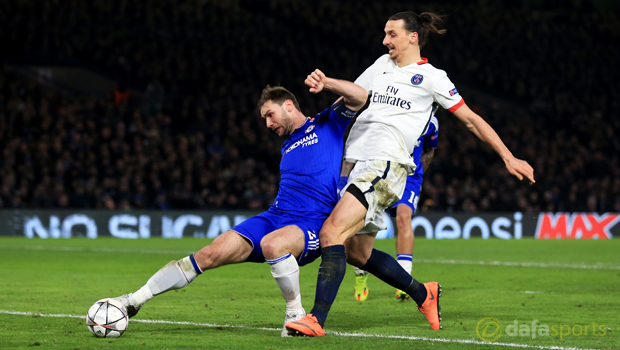 Zlatan Ibrahimovic believes Paris Saint-Germain have a good chance of winning the Champions League if they can replicate the performance shown against Chelsea on Wednesday.

The French champions arrived at Stamford Bridge holding a slender 2-1 advantage from the last-16 first-leg and they managed to book their place in the quarter-final with a solid performance.

Adrien Rabiot tucked home from close-range to open the scoring before Diego Costa gave the hosts a glimmer of hope when he equalised before the break.

However, Ibrahimovic volleyed into the back of the net from inside the six-yard box to give PSG a 2-1 victory on the night and a convincing 4-2 aggregate triumph.

It was one of the most comfortable matches Laurent Blanc’s men will have been involved in this season and the lack of fight from the Chelsea players after the second goal went in was clear to see.

Ibrahimovic, who has scored four and set up the same amount in Europe this term, believes his side can go all the way in the competition if the standard remains as high as it has been.

“I keep it simple; let’s see what happens in the quarter-final,” he said. “If we can repeat what we did against Chelsea we’ll probably have a good chance but we are still in a phase were we are progressing.”

PSG, who are priced at 8.50 to win the tournament outright, now join Wolfsburg, Benfica and Real Madrid in the quarter-finals after the trio made it past their respective last-16 ties.

The French outfit remain on course for an historic quadruple this season with the club 23 points clear at the top of Ligue 1, while they still remain in the two domestic cup competitions.

Blanc’s men return to action on Sunday when they travel to Troyes and the visitors are 1.25 favourites, a draw is priced at 5.50 while the hosts are a 12.00 outside shot.