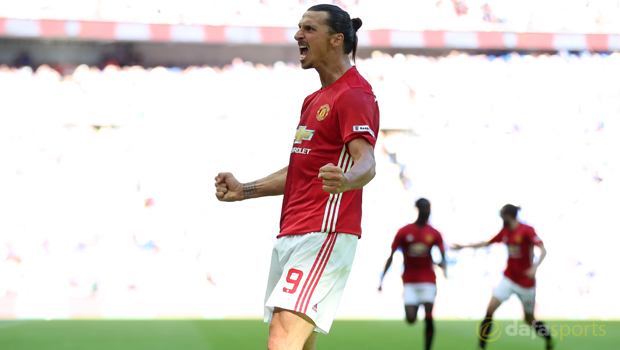 Zlatan Ibrahimovic is confident Manchester United will get better as time goes on and add more trophies to the cabinet following Sunday’s Community Shield victory.

United picked up their first piece of silverware at the weekend after defeating defending Premier League champions Leicester City 2-1 at Wembley in a hard-fought encounter.

The Red Devils, now under the guidance of former Chelsea boss Jose Mourinho, didn’t look at their best and the lack of creativity and innovation will be a worry ahead of the new Premier League season.

However, the Portuguese boss has brought in some new faces this summer and it will take time for everyone in the squad to gel and understood each other’s game.

Ibrahimovic, who joined on a free following his release from Paris Saint-Germain, managed to score the winner against the Foxes and appears to be settling in very nicely.

It has been slightly tougher for Eric Bailly, who made the switch from Villarreal, and the defender endured a couple of nervy moments at Wembley.

Ibrahimovic expects the performances not to be at the highest level yet but he is adamant the standard will increase once the communication between the players gets better.

“My individual performances will come,” the former Sweden international said.

“We’re in the beginning and building up my physique, my conditioning, and I am yet to know the team-mates. When all these things are settled, things grow easily. You can then just play your game and enjoy.”

United, who are 4.20 to lift the Premier League title, open their account away at Bournemouth on Sunday and the visitors are 1.75 favourites to get the win, a draw is priced at 3.50 while the Cherries are the outside chance at 4.75.