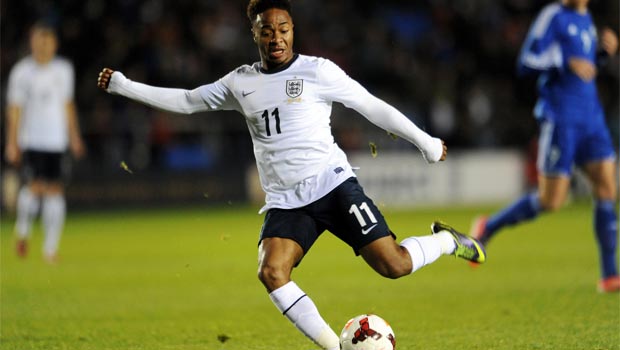 Liverpool midfielder Raheem Sterling has been told by England boss Roy Hodgson that he is currently playing his way into his plans for this summer’s World Cup finals in Brazil.

Hodgson has a myriad of candidates lining up to fill the void left by Arsenal winger Theo Walcott who is set to miss the tournament because of a cruciate knee ligament injury he suffered in the FA Cup win against north London rivals Tottenham last month.

Walcott’s Arsenal team-mate Alex Oxlade-Chamberlain and the Tottenham duo of Aaron Lennon and Andros Townsend are vying for a place in the Three Lions squad. But Hodgson has dropped the biggest hint yet that Sterling could be rewarded for his good form with a call-up to the squad for the friendly international against Denmark at Wembley on March 5.

On Sterling, who has become a first-team regular at Anfield this season and has shone alongside fellow England international Daniel Sturridge and prolific Uruguayan hitman Luis Suarez, Hodgson said:
“Since he got back into the Liverpool team his form seems to be going up and up.

“He is doing it for a top team and that puts a lot of pressure on everybody else because if you can do it at the top of the table with Liverpool then you can do it in an England shirt as well.”

Sterling is not the only young gun who has a chance of winning a seat on the plane to Brazil, with Cardiff City’s on-loan signing from Manchester United, Wilfried Zaha, and Norwich City’s Nathan Redmond also in the frame.

“Now you’ve got the boy Zaha back in the frame again because he’s playing football at Cardiff after his time out; Redmond is back at Norwich doing very, very well,” Hodgson added.

“We’re not short of candidates. It’s going to be choice at the end of the day, how many of that type of player do I want to include in the squad and in which case, which ones?”