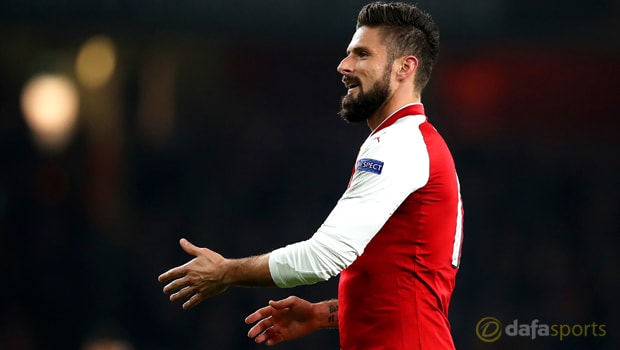 France assistant coach Guy Stephan has hinted Olivier Giroud needs to move on from Arsenal in January to boost his chances of earning a place in their World Cup squad.

The 31-year-old was reportedly on the verge of leaving for Everton over the summer following the arrival of Alexandre Lacazette, however, he opted to remain in north London as he looked to fight for his place.

Lacazette already boasts eight goals in 15 Premier League outings and has unsurprisingly been Arsene Wenger’s first choice, having signed from Lyon for £43.5million.

Giroud is yet to start a Premier League game this season with all 12 of his appearances coming from the bench as he plays second fiddle to his countryman.

The former Montpellier man has netted 29 times in 69 outings for France, who are priced at 7.00 to win the 2018 World Cup outright, and he did earn a call up to their most recent squad for the games friendlies with Wales and Germany.

Didier Deschamps handed Giroud a starting role against the Welsh and he chipped in with a goal, but Lacazette was preferred for the 2-2 draw with world champions Germany.

Stephan insists Giroud knows the situation and has urged the striker to make the right decision next month or risk missing out on the trip to Russia.

“Didier’s already had the opportunity to talk about it. He has to find a solution in the coming weeks.

“It’s up to him. He’s played very well in recent months with us. He has a very good goals-to-games ratio, but he now has to play.”