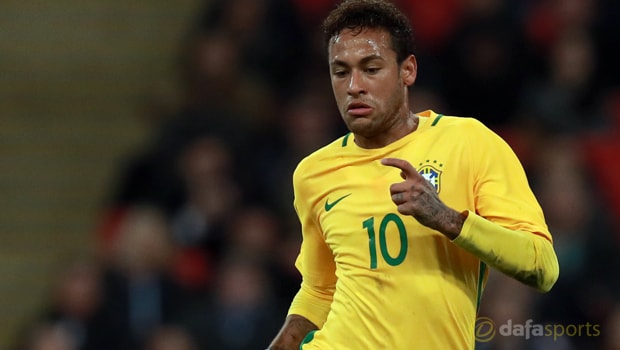 Brazil international Neymar says his recovery from a foot injury is going well and he expects to be back to full fitness in time for the 2018 World Cup this summer.

Paris Saint-Germain’s Neymar, who became the world’s most expensive player when arriving from Barcelona last summer, picked up an injury in a Ligue 1 game on February 25 and it was deemed surgery on a broken metatarsal bone was required.

The 26-year-old forward was in impressive form before being sidelined, having scored 25 goals and contributed 16 assists for the French champions, and he will be aiming to replicate those performances in Russia.

Brazil, who are joint 5.50 favourites to win the World Cup alongside defending champions Germany, start their quest for glory against Switzerland on June 17, a month after their captain is expected to return from injury.

Neymar has revealed everything is going smoothly in his rehabilitation and he has vowed to go the extra mile to ensure he is in peak condition for the Selecao. “I hope to get there in great shape,” he told a news conference in Sao Paulo.

“I get my final examination on 17 May and then I’ll be free to play. I had an examination last week, it is all perfect, evolving well, so I hope that continues so I can get back as soon as possible.

“I am having treatment every day, and from the moment I start training I am going to work harder than I ever worked because this is a dream that’s coming up. It’s a World Cup.

I’ve waited four years for this chance, it’s close.” Neymar, who scored four goals at the 2014 World Cup, is 10.00 to win the Golden Shoe this year, just behind Argentina’s Lionel Messi who is 9.50 favourite.

Brazil have been drawn in Group E alongside the Swiss, Costa Rica and Serbia and the five-time world champions are 1.22 favourites finish top of their group.