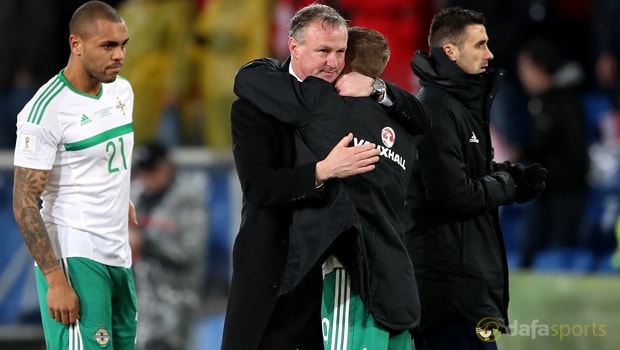 Michael O’Neill says a decision on his future as Northern Ireland manager can wait for the time being after the Green and White Army failed to qualify for the 2018 World Cup in Russia.

Ireland, who finished second behind world champions Germany in their qualifying group, went into Sunday’s play-off second-leg clash against Switzerland in Basel trailing 1-0 after the controversial meeting at Windsor Park.

The Swiss were awarded a penalty after Blackburn Rovers midfielder Corry Evans was believed to have handled the ball in the area although replays showed the ball hit the 27-year-old around the shoulder/top of his back.

O’Neill’s men still had an opportunity to turn things around in the second-leg but they were unable to break down a resolute opposition defence and missed several chances throughout the 90 minutes.

West Brom defender Jonny Evans almost forced the match into extra-time but his header in the dying seconds was cleared off the line by Ricardo Rodriguez, who converted the controversial penalty in the first-leg.

It is now unclear whether O’Neill will decide to remain as manager with a number of club opportunities around but the 48-year-old is not yet ready to think about that.

“I’m not giving it any thought. I don’t think it’s a reasonable question to ask me to be fair. My focus is with the players in the dressing room,” he told Sky Sports after the match.

Sunderland, who sit bottom of the Championship, are currently searching for a manager following the sacking of Simon Grayson whilst Premier League strugglers Everton are also eyeing up a replacement for the recently sacked Ronald Koeman.