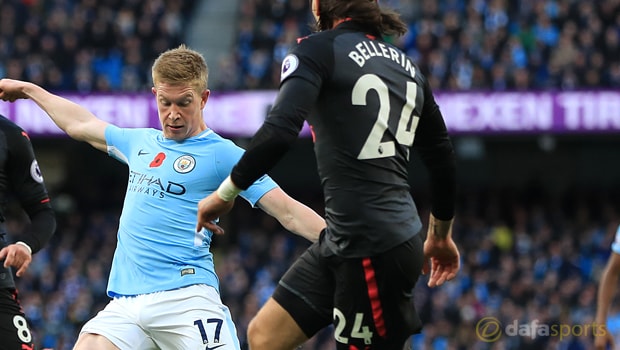 Kevin De Bruyne says it is unlikely Manchester City will be able to match Arsenal’s ‘invincibles’ from the 2003-04 season and go through the entire Premier League campaign unbeaten.

City have been in sensational form this season, winning 10 and drawing one of their 11 Premier League matches, and many already believe the blue side of Manchester will be lifting the trophy come May.

The Citizens’ attacking prowess has showed this term, having scored 38 league goals, whilst a huge defensive improvement has been made with just seven goals conceded – the joint-second best record.

Pep Guardiola’s men are now being tipped to repeat Arsenal’s magnificent achievement back in the 2003-04 when the Gunners went through the season unbeaten, winning 26 games and drawing 12 on their way to the title.

However, Belgium international De Bruyne feels the standard of competition is extremely high and he believes his side will come unstuck against at least one team.

Speaking to Sky Sports News, he said: “I don’t think that will be possible because I think you have so many games and too many important games.

City, who are 1.17 to win the title, return to action on Saturday with a trip to the King Power Stadium to take on 2015/16 champions Leicester City, who are under the guidance of Claude Puel.

The Foxes are quoted 8.50 to pick up all three points, a draw is priced at 5.50 whilst the visitors are 1.36 favourites to keep their impressive run of form going.