Memphis Depay out to prove himself 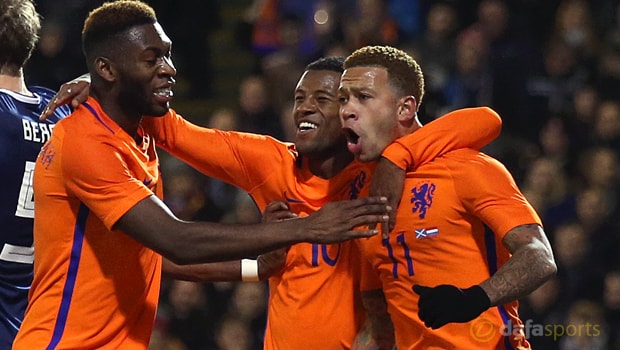 Memphis Depay says he wants to play a “leading role” for the Netherlands following a mixed international career to date.

The winger shone as an impact player as the Oranje finished third under Louis van Gaal at the 2014 World Cup, but his fortunes in the intervening period have often mimicked his national team.

After another fine season for PSV Eindhoven, Memphis was reunited with Van Gaal at Manchester United in 2015, but he failed to find his feet amid questions regarding his attitude to the game.

A move to Lyon seems to have allowed him to regain his focus although it was not enough to help his country reach the 2018 World Cup, the second successive major tournament they have failed to make.

Ronald Koeman has been appointed as their new manager and will be keen to make a winning start on Friday against England.

A home win in Amsterdam is 2.38, with the draw 3.10 and the Three Lions are 2.88. With Wesley Sneijder and Arjen Robben retiring from international football, the 24-year-old says now is the time for him to step up and become a leader for his country.

“A few years ago I was not consistent enough and then you could want something, but then I did not have the high level that I have now,” the 34-cap star told De Telegraaf. “I wanted to be decisive in every game, but I was not.

In the past I often thought about too many things, I really want to show that I am in shape and strive for an even higher level.

“Of course, you always want to be decisive and also take other team-mates to a higher level. I know my skills and it’s important to coordinate everything within the team.

I would like to claim a leading role, take the Oranje in tow, and believe also that it is possible.”