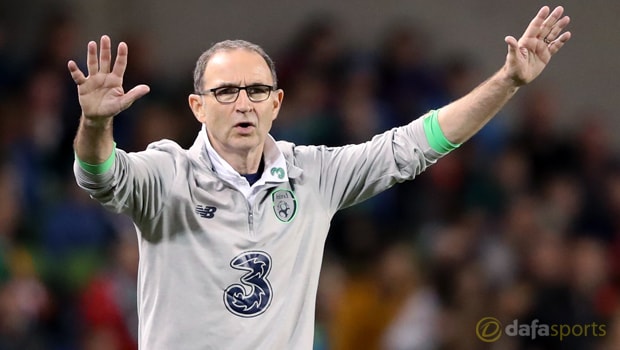 Martin O’Neill is hoping his Republic of Ireland side can repeat their heroics from Euro 2016 as they bid to keep their World Cup qualifying hopes alive by beating Wales on Monday.

The Green Army will head into the match at the Cardiff City Stadium knowing a victory would guarantee them at least a play-off spot, while they also remain in with a chance of topping the group and securing an automatic place at next summer’s finals in Russia.

Ireland have not qualified for a World Cup since 2002, but O’Neill is hopeful his side can end that wait this time around, and he wants his team to draw on their experiences from Euro 2016 when they beat Italy 1-0 in their final group game to advance through to the knockout stages.

“The approach will be similar to Italy in Lille, a lot of verve and determination and closing them down,” O’Neill said.

“There’s a bit of everything in it, there’s a bit of patience too but at the same time we know at the end of the 90 minutes that we’ve got to find ourselves in front. We’re capable of doing that.”

O’Neill has also urged his side to secure the victory for injured full-back Seamous Coleman, who remains on the sidelines after suffering a double leg break during their reverse meeting with Wales in March.

“Seamus would be very much to the forefront of our minds,” the 65-year-old added.

“He’s obviously a class player, a world-class player, he’s been essential for us and we’ve missed him. He’s making a good recovery now.”

Ireland are unbeaten in their last seven matches against Wales, a run that stretches back to 1992, and they are priced at 3.30 to secure the victory they need on Monday night, while Chris Coleman’s men are available at 2.30 and the draw is on offer at 3.20.