Jorge Sampaoli: Argentina will be at World Cup 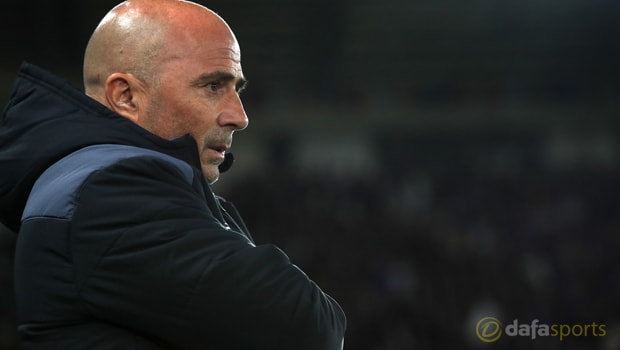 Boss Jorge Sampaoli is convinced Argentina will still qualify for next summer’s World Cup despite their latest setback goalless draw at home to Peru.

The stalemate leaves the 2014 finalists outside the qualification places in the South American standings, with just one game left to play.

Sampaoli and his team travel for a high-altitude away fixture in Ecuador on Wednesday and need three points to have any chance of qualifying automatically for Russia.

The two-time World Cup champions must win and hope Peru draw or lose against fourth-placed Colombia in order to guarantee a play-off position against New Zealand.

Lionel Messi struck the post in the second half against Peru in Buenos Aires but, despite dominating, the home side were not able to get a goal.

Argentina have drawn three straight qualifiers and that means they trail Peru on goal difference going into the final round of games.

Just four points separate Uruguay in second (28) and Paraguay (24) in seventh and a win for Argentina could still see them qualify automatically.

Their recent record in Ecuadorian capital Quito, which is 2,900m above sea level, is poor.

Argentina have lost two out of their past three games, drawing the other, although Ecuador have lost their previous five qualifying games in this campaign.

Sampaoli is not losing faith in his team, with Argentina having been present at every World Cup since 1970.

“I am very confident that if we play with the conviction with which we did [against Peru] we will be in the World Cup,” he said.

“Argentina was far superior to Peru, playing with a lot of authority.

“The situation is not comfortable. But the ranking still depends on us. We could not beat them on the scoreboard but they did in the game. We are very hopeful for everything that comes.”