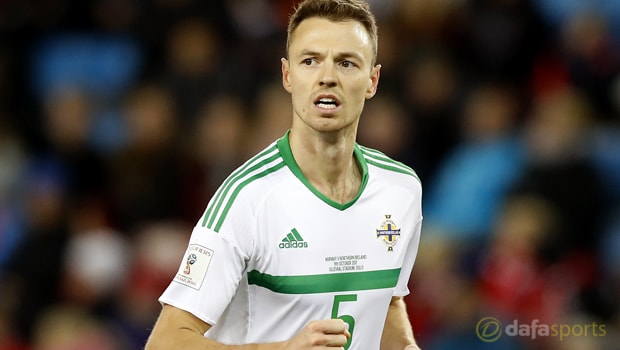 Jonny Evans has talked up Northern Ireland’s defensive ability and believes they are a side to be feared after booking their place in next month’s World Cup play-offs.

Michael O’Neill’s troops have performed consistently during the 2018 World Cup qualifying campaign as they look to secure a spot at the showpiece event for the first time since 1986.

The ‘Green and White Army’ will now need to come through a two-legged play-off tie to book their place in Russia next summer.

The likes of Italy and Portugal are amongst the nations that will also need to go through the play-offs, but Evans insists Northern Ireland will be confident of progression.

Evans and co managed to claim seven clean sheets during the group stage and he feels their defensive organisation will stand them in good stead for whoever they are drawn against.

“We’re a real hard-working team, we defend really well as a unit, we all work hard for each other and that’s not nice to play against,” Evans said.

“We’ve got a good defensive record throughout the campaign, we’re disappointed conceding a goal (against Norway), it would have been nice to have the eight clean sheets.

“I think a lot of teams will fear us. Every team that plays us talks about our strength on set pieces and being hard to break down.”

He added: “I think there’s a fine balance between underestimating and being fearful.

I think teams will cover all aspects and will look at us and see we are good at set pieces – but they haven’t been able to deal with it up until now, and that’s just one aspect of our game, they can’t handle us on set plays.”

Evans will now be turning his attentions back to the Premier League and his West Brom side can be backed at 4.20 to pick up all three points when they travel to face Leicester, who are priced at 2.00 to come out on top on Monday, while the draw is available at 3.40.