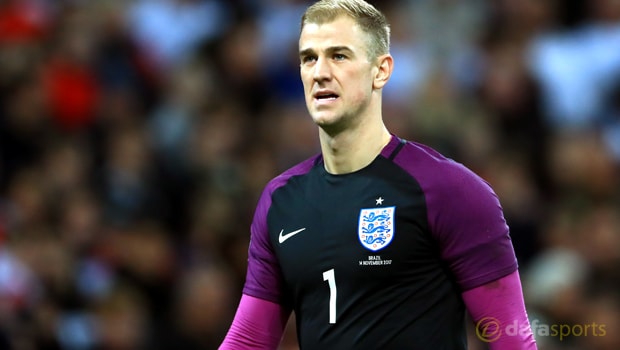 Goalkeeper Joe Hart believes England are starting to build momentum ahead of the 2018 World Cup and has played down concerns over being one of the older members of the squad.

The West Ham loanee sat out Friday’s goalless draw with world champions Germany as Gareth Southgate preferred Everton stopper Jordan Pickford, but Hart returned to the starting XI for Tuesday’s friendly with Brazil that also ended without any goals.

Southgate had to name a very youthful looking line-up for both matches at the national stadium due to a number of high-profile withdrawals.

The likes of Pickford, Ruben Loftus-Cheek, Dominic Solanke, Joe Gomez, Tammy Abraham and Jack Cork all earned their debuts and Hart admits he was impressed with their exploits.

Hart insists he doesn’t feel any pressure at being one of the more experienced members of the squad and feels the youngsters stepped up against tough opposition.

“It was certainly a night where we had to dig in. They are a fantastic team with so much attacking threat, but we minimalised their chances, and I had to be there when they did get them,” Hart told West Ham’s official website after the Brazil draw.

“It doesn’t put any extra pressure on me that I was the most experienced player on the back line because there’s no pressure when you’ve got the quality that I’ve got in front of me.

“It doesn’t matter how old you are, all the greats in the game had to start at some point and I’m sure they were brilliant when they started.

We’ve got people who are young in age, but they’re in one of the most competitive leagues in the world and they’re performing well for their country.

“The only way we can get people back on our side is by performing as we have, showing guts, determination and will to play for our country, and turn that into wins.”

The 30-year-old has also revealed his delight at claiming the 42nd clean sheet of his England career and believes the Three Lions, who can be backed at 21.00 to win the 2018 World Cup, are starting to gel as a unit.

He added: “Of course it was important to keep a clean sheet. [We’re building] momentum and the lads performed well in front of me and they didn’t give me much to do.”