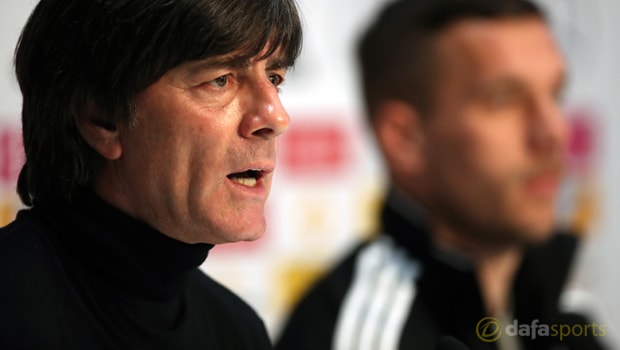 Germany boss Joachim Low has praised his inexperienced squad after they secured a battling 1-1 friendly draw against Denmark on Tuesday.

Low has selected an experimental squad ahead of the upcoming Confederations Cup, leaving many of his established players at home, as he already has one eye on next year’s World Cup.

Joshua Kimmich scored a late equaliser to salvage a draw for the Germans in Brondby and Low believes there were plenty of positives to take from the match, particularly the levels of commitment shown by his players.

“There were more positives than negatives,” Low told reporters. “It was a good test of where we are. We only had one training session, so I am very happy.

“The commitment levels from everyone was very good, we can work on coordination in the coming days.”

Next up for the reigning world champions is a World Cup qualifier against San Marino, a side they beat 8-0 in November, at the Stadion Nurnberg on Saturday.

The Germans should have little trouble in maintaining their 100 percent record in qualifying during that match, while a confidence boosting victory would also stand them in good stead ahead of the Confederations Cup.

Low’s men have been drawn in Group B for that tournament, where they will face Australia, Chile and Cameroon.

Germany have never won the Confederations Cup, with their best showing to date coming when they claimed third place on home soil in 2005, but they are priced at 3.00 to secure their maiden triumph at this year’s tournament.