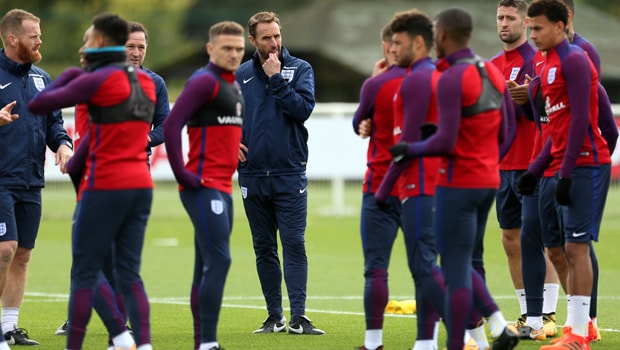 England boss Gareth Southgate admits he has yet to decide on a permanent captain as his side looks to seal qualification for the World Cup in Russia by defeating Slovenia at Wembley.

Tottenham forward Harry Kane is set to skipper his country as they chase a seventh win in nine qualifiers and an automatic spot at next summer’s World Cup.

Previous skipper Wayne Rooney retired from internationals in August and the Three Lions boss hasn’t given any indication on a permanent replacement to date.

Southgate has rotated the captaincy since taking over from Sam Allardyce last November. Kane has joined Jordan Henderson, Gary Cahill and Joe Hart in donning the armband during Southgate’s tenure to date.

Being England captain is about a lot more than simply leading on the field of play, according to Southgate.

“It’s not just about the matchday – it’s everything around the camp, thinking how you integrate the squad and how you involve other people and the moments to step forward, leading by example, leading by having a quiet word with people,” said Southgate.

“There’s lots of things that go towards making a good captain. That won’t happen overnight, we’re talking about leadership experience that comes over a longer period of time.”

Kane has netted 41 goals for club and country so far in 2017 and having previously led England out in Paris and Glasgow as captain, he says it will give him a massive buzz to now do so at Wembley.

“Growing up as a kid you always want to play for your country and dream about being captain, especially walking out at Wembley.

That will be an amazing thing for me personally,” he said. England are 6.50 to beat Slovenia 2-0, with Kane 3.20 to score the opening goal.