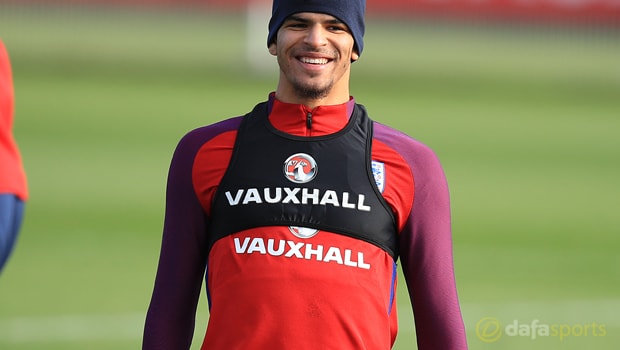 Dominic Solanke says he feels “incredibly blessed” after the Liverpool striker was one of three players to be called into Gareth Southgate’s England squad for the friendly against Brazil on Tuesday.

England were hit by a number of withdrawals ahead of the recent 0-0 draw against world champions Germany with Harry Kane, Harry Winks, Raheem Sterling and Fabian Delph all missing through injury.

Tammy Abraham, Ruben Loftus-Cheek, Joe Gomez and Jordan Pickford all made their debuts at Wembley and Southgate could give three more players an opportunity in the senior team on Tuesday.

Manchester United defender Phil Jones, who made a crucial goal-line clearance against Germany, picked up an injury during the first-half and he has been ruled out of the next international outing.

Solanke, who joined Liverpool in the summer after leaving Chelsea, and Bournemouth midfielder Lewis Cook were both key members of the Three Lions’ Under-20 World Cup-winning squad, as top goalscorer and captain respectively.

Both players have now been added to the squad for the Brazil match whilst goalkeeper Angus Gunn, on loan at Norwich City from Manchester City, is included after Stoke City’s Jack Butland picked up an injury.

Solanke could be handed a starting opportunity on Tuesday and the 20-year-old expressed his delight at the call-up on social media on Saturday night.

He posted on Twitter: “Feel incredibly blessed and honoured to get called up to the @England Senior Squad! Thanks for all the messages!”

England are 4.50 outsiders to triumph against Brazil at Wembley, a draw is priced at 3.60 whilst the visitors, who are one of the favourites to win the 2018 World Cup in Russia, are firm 1.73 favourites.