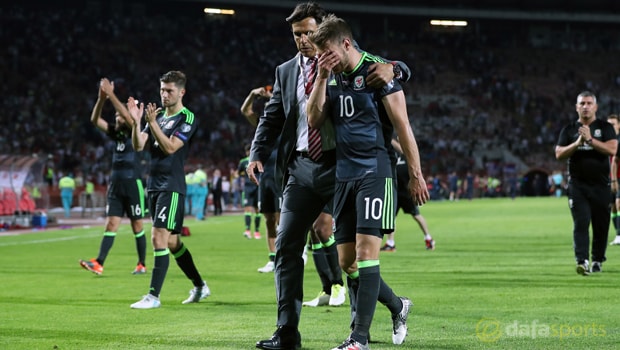 Chris Coleman was pleased with Wales’ hard-fought 1-1 draw in Serbia on Sunday although he conceded it could have been even better for his side.

Aaron Ramsey gave the Dragons a first-half lead during the World Cup qualifier at the Red Star Stadium, as he cooly converted a penalty, but Aleksandar Mitrovic levelled things up for the hosts with 16 minutes remaining.

Coleman’s men are still unbeaten in Group D, but they have now drawn five qualifiers in a row and they remain four points behind Serbia, who are level at the top of the standings with the Republic of Ireland.

Wales know they will have to start turning draws into victories if they want to secure qualification for a second successive major tournament, but Coleman was satisfied with his side’s battling point in Belgrade.

“It was a great point,” he told Sky Sports. “But we were 1-0 up, they weren’t peppering Wayne Hennessey.

“You expect a tough game here, but we had chances over 90 minutes. You aren’t going to come here and play open football, we did that before and you know what happened. We lost 6-1.”

The 47-year-old went on to praise the spirit his side showed throughout Sunday’s match, singling out midfielder Joe Ledley, who went into the contest having not played a competitive match for three months.

“I can’t fault the players, they worked so so hard. Joe Ledley hasn’t played for three months and he gave me 90 minutes, incredible,” he told reporters.

Next up for Wales is a potentially pivotal qualifier with Austria at the Cardiff City Stadium on September 2, a match they must win to realistically remain in the hunt for a place at the next summer’s World Cup in Russia.

Following the match in Cardiff, Wales will face further qualifiers against Moldova, Georgia and Ireland and they are priced at 4.50 to end the campaign top of the group.