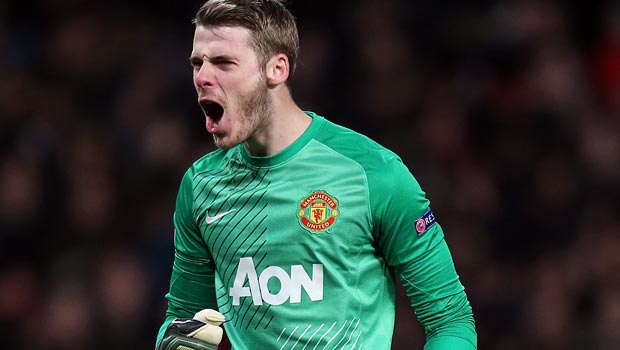 Manchester United goalkeeper David de Gea’s World Cup chances increased last night after one of his rivals for the Spain number one jersey, Victor Valdes, was ruled out for the rest of the season.

Valdes, who has been with Barcelona man and boy, will need surgery after badly damaging his anterior cruciate ligament in the La Liga leaders’ 3-0 win over Celta Vigo on Wednesday night.

On hearing the news of Valdes’ injury, de Gea tweeted: “I want to give all my support and strength to a goalkeeper that I admire and respect.
Victor Valdes, wish you get well and see you soon in the pitch.”

Neymar returned to form to bag a brace of goals with Lionel Messi scoring the other against Celta, as Barca remain on course for a hat-trick of trophies: the Copa del Rey, La Liga and the Champions League.

Afterwards, under-fire Neymar shared Valdes’ pain: “We are very sad for our team-mate.,” he said.

Barca boss Tata Martino added: ‘It’s a big blow but this team has rolled with punches for some time now and we will pull through this.’

Valdes, 32, will be out for several months and the injury could also hamper his attempts to secure a summer move away from the Nou Camp as well as forcing him to miss the World Cup in Brazil.

Valdes is known to want to leave Barcelona at the end of the season, with the goalkeeper previously stating that a move to the Premier League ‘would be a good option for him’.

Barca already have a replacement lined up in the shape of Borussia Monchengladbach’s Marc-Andre ter Stegen.

Monaco have been strongly linked with the Spaniard but Liverpool, Arsenal and Manchester City have reportedly been keeping tabs on him too.

Spain are fourth favourites to win the World Cup in Brazil, at 8.00.