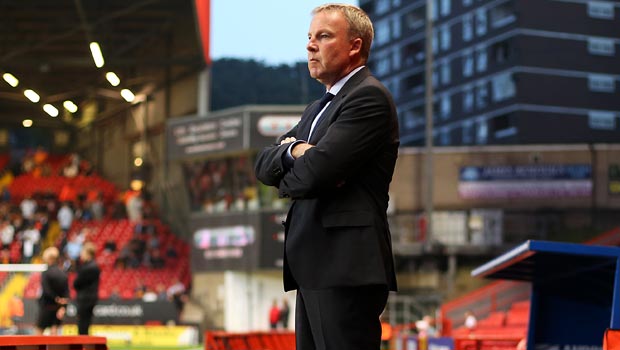 Wolves boss Kenny Jackett is hoping that his men can put on a performance worthy of the home supporters when they take on Huddersfield at Molineux on Wednesday night.

The Midlanders currently sit in sixth place in the Championship table but, due to the tight nature of the division, victory over the Terriers will see them move above their rivals to the top the standings.

But it will not be easy as the Yorkshire club have held the Indian sign over Wolves in recent years and have won eight of the last 10 contests between the clubs.

However, Chris Powell’s side have struggled so far this term and sit 21st in the table having won just two Championship games all season.

They did pick up three points at the weekend, however, with a 2-1 success over Millwall and Jackett feels, they “will certainly be a lot harder to break down and a lot harder to beat” with the former Charlton chief now in charge.

There have been no such problems for Wolves this term, however, with Jackett desperate to get the club back into the Premier League.

They managed a 3-3 draw with Reading in their last league encounter and the boss had already alluded to how important the travelling fans were on that occasion.

And now, with the prospect of topping the standings, the former Watford manager has urged his charges to give the Wolves’ faithful reasons to be in full voice once again.

“At home we need to make sure we earn that – you don’t just get given that type of support,” he said. “You have to earn that every single game. You can’t just ask the fans to get behind you and then it just happens.”

Wolves are priced at 1.75 to win the match, with Huddersfield on offer at 4.55 to make it back-to-back league wins.