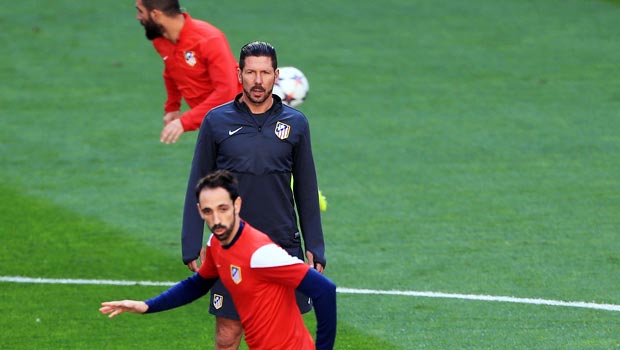 Atletico Madrid boss Diego Simeone insists his men are ready for “another final” as they prepare for Wednesday’s Champions League clash with Juventus.

The Group A encounter throws together the champions of Spain and Italy in what looks set to be cracking encounter at Vicente Calderon, with Atletico on offer at 2.25 to claim the spoils and Juve priced at 3.43.

While Juventus strolled to the Italian title last season, Atletico were made to fight right until the final game of the campaign, as they battled it out with Barcelona and Real Madrid all season long.

They have begun this season in similar fashion and currently sit just two places and two points behind table-topping Barca, while the Old Lady are top of Serie A after five straight wins.

But Simeone knows that his man cannot afford to drop their standards with so many big games on the horizon both domesticity and in Europe.

“This match is a final, as it will be in Valencia (on Saturday) and the following game against Espanyol,” he said. “Juventus always have good teams and will be very competitive.”

But they made a losing start to this season’s event with a 3-2 defeat at Olympiakos, while Juve took care of Malmo 2-0 at home courtesy of two Carlos Tevez goals.

And the Argentine tactician is expecting another thorough examination of his side’s credentials when battle lines are drawn in the capital.

“I’ve got a lot of respect for them and the work they do as a team,” he added. “They’ve got some great champions in their side and that shows on the pitch.”