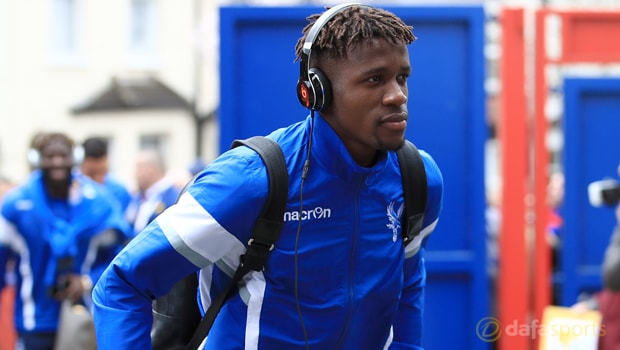 Crystal Palace winger Wilfried Zaha has rejected Gareth Southgate’s claims that suggested there was a timescale on his England selection.

Zaha represented the Three Lions on two occasions during friendly matches but he decided in 2016 to play for the Ivory Coast, the country of his birth.

Speaking to the press last week, Southgate had claimed he tried to persuade Zaha to commit his future to England, but he only wanted players who desperate to wear the shirt.

The former Middlesbrough coach also claimed there was a “disappearing egg timer” on Zaha going to the Ivory Coast but the Palace man has rejected those claims.

A statement released by his representative Will Salthouse of Unique Sports Management, said: “In light of recent comments and reports questioning Wilfried’s desire or passion to play for England I feel it important to set the record straight.

“Wilfried did not impose a timescale or set a date by which he had to be selected by England, there was no ‘disappearing egg timer’.

“The ‘private’ meeting with Mr Southgate was very amicable, however the fact remains that Wilfried made his decision to play for the Ivory Coast prior to Mr Southgate being appointed interim and subsequently permanent England manager.

“It was Wilfried’s personal choice and it was his right as a senior player to accept the opportunity to represent his nation of birth and that of his family heritage.

His ‘desire’ or ‘passion’ should never have been publicly questioned for making that decision.

“Wilfried is very proud of his family and very proud to represent the Ivory Coast, most recently demonstrated by his performance against Russia.”