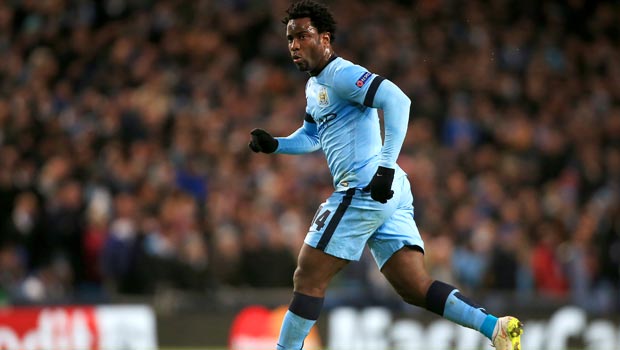 Wilfried Bony claims Manchester City will probably need to win their remaining 11 games of the Premier League season if they are going to overhaul Chelsea’s current lead at the top and retain the title.

The 26-year-old Ivory Coast striker was brought to the Etihad Stadium from Swansea during the January transfer window in a deal worth around £28million.

However Bony only linked up with his new team-mates earlier this month having helped his country win the African Cup of Nations alongside City’s Yaya Toure.

He has so far made three substitute appearances, including a 12-minute run-out in Sunday’s 2-1 defeat at Liverpool which put a dent in the club’s hopes of defending their Premier League crown.

City remain five points adrift of leaders Chelsea, who also have a game in hand against Leicester City at Stamford Bridge, because they were busy winning the Capital One Cup against Tottenham at Wembley on Sunday.

And Bony feels Manuel Pellegrini’s side will now have to try and pick up maximum points in all of their remaining fixtures.
“It is disappointing. We have made it difficult for ourselves now,” said Bony.

“If Chelsea win their game in hand, it will be more difficult for us to get close to them.

“But we still hope – there are 11 more games and every game we just have to win, be positive for the rest of the league and try to get maximum points.

“We need to win, win, win and hope Chelsea will drop some points. It is a difficult moment for us but we still hope we can do it.”

City are 1.25 to defeat Leicester City at the Etihad Stadium on Wednesday night, while the bottom club are 9.81 to pull off a shock win and the draw is 5.95.