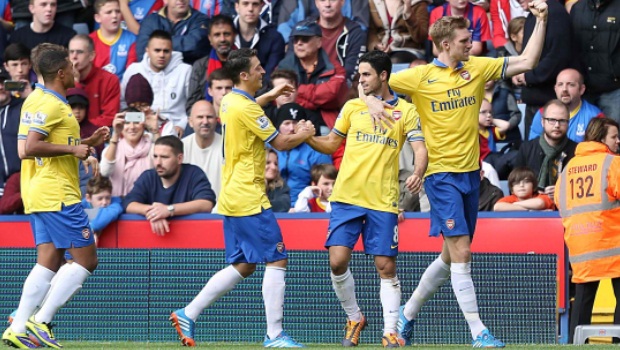 Arsene Wenger believes his Arsenal side are now starting to show the maturity that they have lacked in recent seasons as they look to win their first trophy for eight years.

After losing to Borussia Dortmund in the Champions League on Tuesday, the Gunners bounced back in superb style by winning 2-0 at struggling Crystal Palace to retain their place at the top of the Premier League table.

Despite the scoreline, the victory could hardly be called comfortable, as after a lacklustre first 45 minutes, a Mikel Arteta penalty early in the second half and a late Olivier Giroud header saw them home at Selhurst Park.

However, they had a number of issues to deal with, due to the sending off of Arteta for a challenge on former Gunner Marouane Chamakh, while goalkeeper Wojciech Szczesny produced a string of fine saves to claim the man of the match award.

In years gone by, Arsenal may well have lost Saturday’s fixture, having often slipped-up against weaker opposition.

They appear to be a much stronger outfit this time around though and Wenger believes their display shows that they are growing as a team as they continue to look for their first piece of major silverware since 2005.

“It was not a game of brilliance, but it was a game of efficiency and patience,” said Wenger. “The pitch was a bit slow, maybe we were not the sharpest as well and the two together made us create less chances than we are used to, but we were serious and determined.

“We were mature, organised and didn’t become nervous and we got the second goal.”