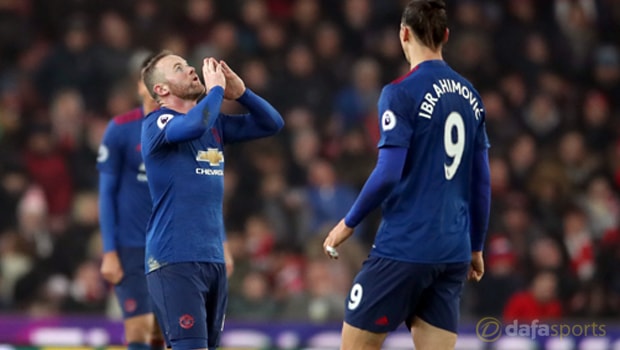 Wayne Rooney insists he remains fully committed to Manchester United despite speculation linking him with a big-money move to China.

The 31-year-old has spent the majority of his career with the Red Devils, originally joining the club from Everton in 2004, and he became their all-time leading goalscorer on Saturday, as he netted his 250th goal for the club during the 1-1 draw at Stoke.

The England international capped a memorable weekend by receiving the Football Writers’ Association’s Tribute Award on Sunday night and he has now confirmed that he is fully committed to the former champions for the time being at least.

“I’m committed,” said Rooney. “I have been at the club for a long time. “Football is a strange game. Anything can happen and things change very quickly but I am happy at Manchester United.”

Rooney has not been an automatic first choice for boss Jose Mourinho this season, starting just eight Premier League matches, and he conceded that there is a sense of frustration that he is not starting more regularly.

“Of course, as I have said before, I want to play more games,” he added. “I am in a happy place, a good moment personally, so I think I have a year, with an option year to go.

We will see what happens and what happens after that.” Rooney will be hoping to extend his goalscoring record in United’s next match, a clash with Hull at the KCOM Stadium on Thursday in the second-leg of their EFL Cup semi-final tie.