Watford only have eyes for points at City Ground 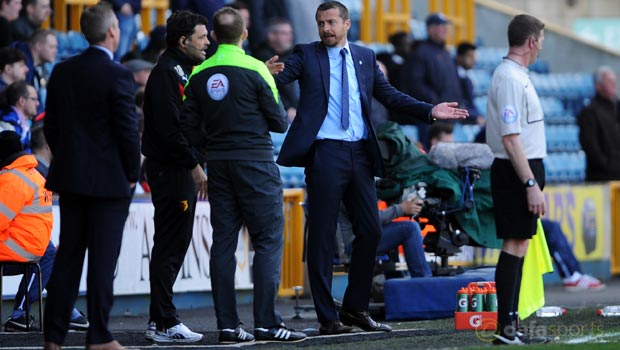 Watford will be keeping their mind entirely focused on winning games between now and the end of the Championship season says boss Slavisa Jokanovic.

With four teams locked in a tense battle for two automatic promotion places to the Premier League, Jokanovic says his side must not attempt to focus on scoring goals to boost their goal difference.

Watford, along with Bournemouth, Norwich and Middlesbrough are engaged in a titanic struggle for the top two spots in what has become a devilishly close Championship race.

With little to choose between the teams in terms of points, Jokanovic was questioned about goal difference in the wake of a 2-0 victory over Millwall.

He says his team must not allow that to enter their minds with another four games still to be played.

“I try to find ways to win the game, goal difference is not under my control,” he said. “I don’t have plans to win five or six nil,” said Hornets boss.

Watford go to the City Ground to face Nottingham Forest on Wednesday and winning that game remains the only focus for Jokanovic despite the increasingly thin margins at the top.

“It is true that at this stage of the Championship, goal difference is very important, but now we have our next chance in front of us at Nottingham Forest,” he added.

Jokanovic’s side are the second highest scorers in the Championship this season, largely down the attacking trio of Troy Deeney, Odion Ighalo and Matej Vydra who have found the net 53 times in between them to date.