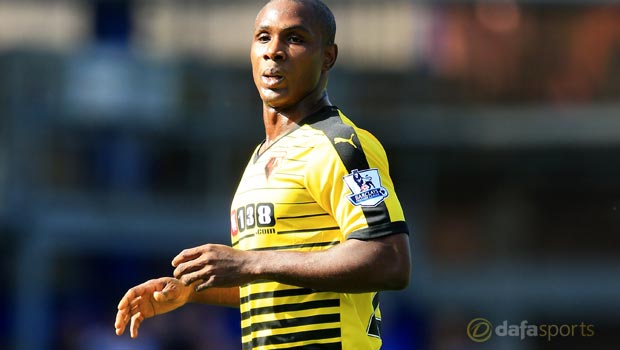 The striker put the Hornets 2-0 up inside half an hour but Daryl Janmaat reduced the deficit on 62 minutes to ensure a nervy finish for Flores’ side.

Watford did manage to hold out to secure the win and the promoted club have an impressive haul of nine points from their opening three games.

Ighalo had the chance to move on in the summer but he snubbed the interest to remain at Vicarage Road and Flores is delighted he opted to stick with Watford.

“He took a decision two months ago to stay here at Watford – he had offers from other teams,” Flores said.

“He decided to stay here with us, so it’s clever because he saw something in the football that is good for him.

“He is involved a lot with the team in training during the week, so for us, he is a very important player.”

Ighalo himself has stressed he doesn’t mind whether he scores or not as long as Watford are winning. The striker has managed four goals to date this season in the Premier League but he claims he hasn’t set a target for the season.

“I don’t have a goals’ target as long as my team win, that’s the most important thing. I don’t care who scores,” Ighalo told AfricanFootball.com.

“It will be great to end up as top scorer in the EPL, but not thinking about that, I just want to take it game after game and help my team win.”

Watford host Crystal Palace next Sunday and they are 2.50 to claim all three points. Palace are 2.88 to come out on top and a draw is 3.25.