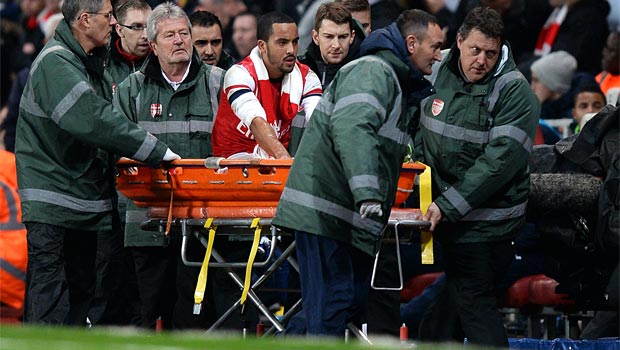 Arsenal’s title chances have been hit as Theo Walcott will miss the rest of the season as a result of a knee injury that will also see him sit out the World Cup with England in the summer.

The forward suffered the injury during the Gunners’ FA Cup third-round victory over Spurs at the weekend and scans have since revealed he has serious ligament damage.

An Arsenal statement read: “Theo has sustained a ruptured anterior cruciate ligament of his left knee.

“He will have surgery in the near future and is expected to be out for at least six months, thus missing the rest of the season and the World Cup.”

Walcott’s injury blow could force Arsenal boss Arsene Wenger to delve into the January transfer market, despite the Frenchman’s well-documented reservations about the winter window.

Wenger was linked with a number of forwards and strikers in the summer but was unsuccessful in his attempts to sign Luis Suarez, Wayne Rooney and Gonzalo Higuain, with Olivier Giroud shouldering much of the goal-scoring burden for Arsenal to date this season.

The Arsenal boss could now step up his search for additions in attack as the London outfit continue their push for the Premier League title, with the Gunners currently top of the table, a point clear of nearest rivals Manchester City.

The injury also comes as a huge blow to England boss Roy Hodgson as Walcott would almost certainly have been included in his 23-man party for Brazil.

Walcott has scored five goals in 36 appearances for England but is yet to feature in a World Cup game for the Three Lions.

He was a surprise omission from the 2010 World Cup squad and didn’t make an appearance in 2006 when he was handed a shock call up as a teenager by then boss Sven-Goran Eriksson.