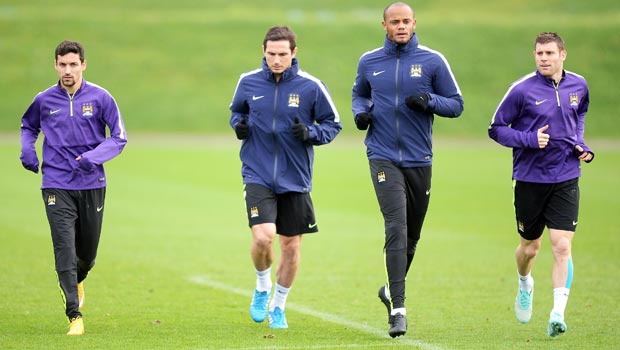 Manchester City skipper Vincent Kompany is confident the team can pick up the win they need to qualify for the knockout stages of the Champions League against Roma in Rome next month.

The Citizens’ future in this season’s competition was hanging by a thread on Tuesday night when 10-man German champions Bayern Munich were leading 2-1 at the Etihad Stadium with five minutes remaining.

However, Argentinian star Sergio Aguero added to his first-half penalty with two late goals to complete his hat-trick and turn the game on its head to secure a much-needed 3-2 win for Manuel Pellegrini’s side.

Bayern, who played for 70 minutes with 10 men after Mehdi Benatia was sent off for the foul on Aguero for the penalty, had already qualified for the last 16 as Group E winners, so it leaves City, Roma and CSKA Moscow level on five points and fighting for the second place going into next month’s final round of games.

A win for City in Rome will be enough for them to progress as long as CSKA don’t defeat Bayern at the Allianz Arena and Kompany is confident they can secure the necessary result.

He said: “We are better with our backs against the wall and we now go to Rome, and it will be an incredible game for everyone.
“We have shown with performances in the Premier League that we never give up, and we have done that again.

“If there is one thing we can take out of our league seasons, (it) is that whenever we have won, we have always done it on the back of a number of games that we have had to win.

“It has always looked at some point as if we had lost it, and we have always had to win four or five games in a row. That is when we are at our best.

“That situation is here now, and I am full comfortable that we can go to Rome and get the result.”

City will look to continue their bid to reduce the gap between themselves and Premier League leaders Chelsea when they travel to second-placed Southampton on Sunday.