Tyler Blackett only thinking about Celtic 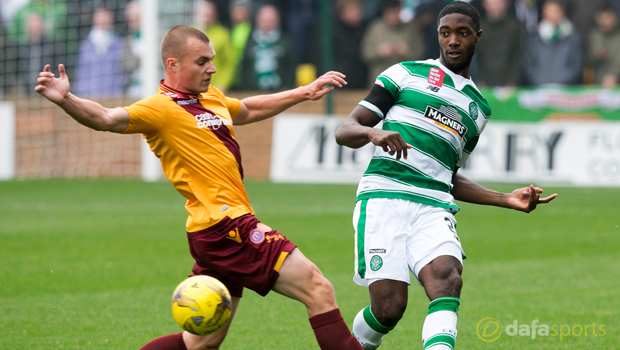 Celtic loanee Tyler Blackett says his side are only thinking about themselves after returning to the top of the Scottish Premiership on Saturday.

An early goal from Nadir Ciftci was enough for the Bhoys to beat Motherwell 1-0 at Fir Park and take advantage of Aberdeen’s slip-up the previous evening at Ross County.

After winning their first eight games of the season, the Dons looked set to mount a serious title challenge but have now lost their last four in all competitions and appear to have some questions to answer.

Following stints on the bench and at left-back, Blackett impressed playing in his favoured central defensive role at Fir Park.

He will now be hoping to keep his place for Thursday’s Europa League clash away to Molde, a game Celtic are currently 2.40 to win, with the draw 3.30 and the Norwegians 2.80.

Having joined on loan from Manchester United in August, Blackett admits he has found playing in Scotland tough.

The 21-year-old says he is expecting plenty more challenges on the domestic front, but is confident that by concentrating on their own fortunes, the Bhoys will be able to claim a fifth straight title.

“We’re focusing on our own performances,” he is quoted as saying by the Daily Record.

“We just tried to take care of things at our end and hopefully they slipped up. There’s still a long season to go, though, so we will see what happens in the end.

“When I came here, everyone said Aberdeen were also a good team but we’re just focusing on our own performances and hoping to do the best we can.”