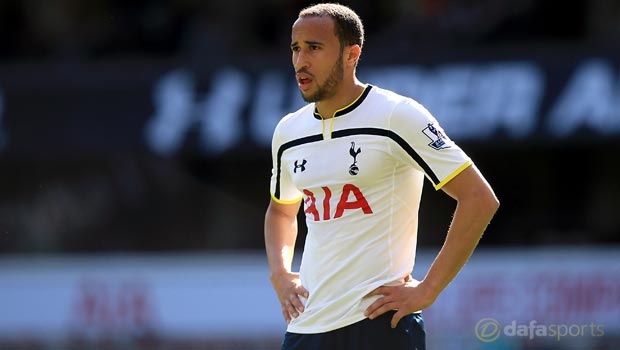 Tottenham winger Andros Townsend is hoping to have a much more successful season following a stop-start 2014/15 campaign.

The England international made just ten Premier League starts for Mauricio Pochettino’s side and failed to feature in over half of the Lilywhites league matches throughout the season.

Despite his lack of action, the 23-year-old did manage to earn a start in the League Cup final defeat to Chelsea and he also maintained his place in Roy Hodgson’s England squad.

The former Queens Park Rangers loan player scored in the 1-1 friendly draw with Italy in March, despite his selection being questioned by certain sections of the media, and he admits that he has to accept criticism if he wants to play at the top of the international game.

He said: “As a footballer, you always get critics whether you’re Ronaldo, Messi or myself. All you can do is answer your critics on the pitch.”

Townsend is once again part of the Three Lions squad that will take on the Republic of Ireland in a friendly match in Dublin on Sunday, before travelling to face Slovenia in a Euro 2016 qualifying match in Ljubljana seven days later.

The Spurs winger is hoping to impress during the double header and admits that he is determined to have a much more productive season during the next campaign.

He continued: “Hopefully I can come back raring to go, fully fit and hit the ground running as I did two years ago. If I’m playing for my club, it means I’m playing well.

“If I’m playing well for my club, the England stuff will come out of that.”

Tottenham finished fifth in the table and are 67.00 to win their first domestic title since 1961 in the next campaign.