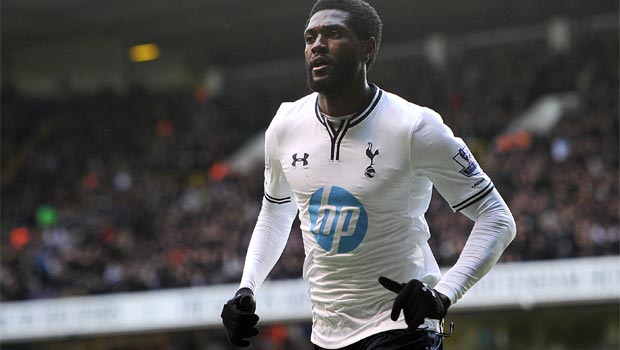 Tottenham boss Tim Sherwood has paid tribute to in-form striker Emmanuel Adebayor who continued his remarkable resurgence with two more goals in the 4-0 rout over Newcastle on Wednesday.

Spurs maintained their push for a top-four place with a convincing victory over the Magpies at St James’ Park. They remain on the coat-tails of Liverpool, just three points behind the Reds who are currently in that coveted fourth place, with 12 games to go.

Adebayor’s goals have played a big part in Spurs’ recent fine form and his latest double takes his tally for the season to eight.

Sherwood, who brought the Togo international back into the side after he had been left out in the cold by former boss Andre Villas-Boas, is delighted with the frontman and paid tribute to his work-rate and commitment to the cause.

He said: “We are always asking for more, but I am not sure we are going to achieve that at the moment. He’s at the top of his game.

“He’s a real credit to the football club at this present moment in time. He’s an example for all our young players to look up to, someone who applies himself on and off the pitch and the training field.

“He never leaves anything on the training field, he works very, very hard and it mirrors that when he steps on to the field.”

Meanwhile, Sherwood admits Spurs are facing a tough task to secure a top-four finish, but the big win at Newcastle will give them hope they can claim a Champions League qualification place during the run-in to the end of the season.

The former midfielder admits his side have to maintain their form and cannot afford any slip-ups, with Liverpool, who beat Fulham 3-2 on Wednesday, looking good for a top-four finish as well.

He added: “We’ve got to keep on the tail of Liverpool. They are relentless. I hope they keep on checking over their shoulders and see Spurs are still there.”

Spurs are next in action when they go to Ukrainian side Dnipro in the Europa League next Thursday before a Premier League trip to relegation-threatened Norwich on February 23.