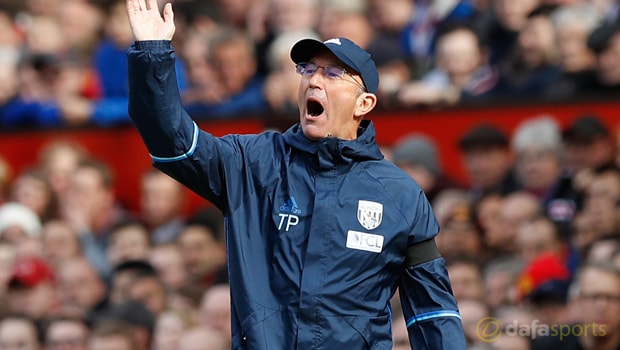 Tony Pulis has warned his West Brom players against taking their eye off the ball ahead of Tuesday’s trip to Watford.

The Baggies have enjoyed a successful few weeks, beating Arsenal 3-1 before the international break and backed it up with a 0-0 draw at Manchester United on Saturday.

With the hype that went with those games, Pulis’ squad could perhaps be forgiven for subconsciously switching off ahead of the game at Vicarage Road.

West Brom won 3-1 when the pair met earlier in the campaign and are 3.00 to make it a double, while the draw is the same price and the Hornets the 2.50 favourites to pick up the points.

After initial fears about relegation following a slow start, it has been an impressive season for Pulis’ side and their current position of eighth in the table is more than deserved.

With them unlikely to finish in the European places, the challenge for the Baggies now is to maintain their concentration in the final weeks of the campaign to ensure they do not slip down the standings.

Watford have endured a mixed campaign but having beaten Sunderland 1-0 at the weekend, will be keen to secure another victory which would all but guarantee their survival.

Pulis admits it could be hard for his troops to motivate themselves for the game in Hertfordshire but says he will do all he can to ensure they are ready.

“You play Arsenal and Manchester United and all the hype that goes with those two clubs,” he said.

“The big worry is Watford now. “We’re playing Watford on a Tuesday night and it’s going to be a different game and we’ve got to be ready for that game.”