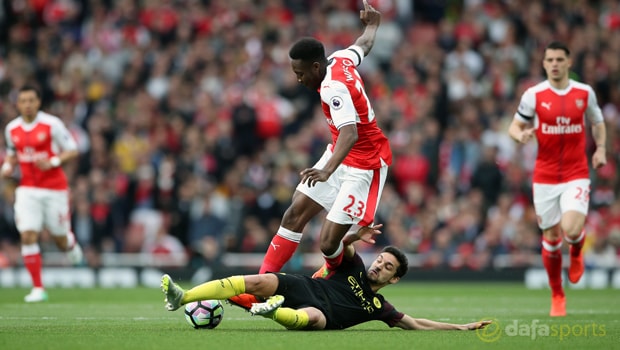 Danny Welbeck insists Arsenal have to improve if they are to have any chance of finishing in the top four this season.

The Gunners, who are now 4.50 to clinch a Champions League spot, twice had to come from behind in Sunday’s 2-2 draw with Manchester City, a result that ended their recent slump following defeats to Liverpool and West Brom.

With ten games left, they currently sit sixth, seven points adrift of City who occupy fourth, albeit Arsene Wenger’s men have a game in hand.

However, as things stand they appear in danger of breaking their incredible run of qualifying for European club football’s premier competition every year since winning the title in 1997-98.

Wednesday provides them with a chance to get back to winning ways when they welcome West Ham to the Emirates, a clash they are 1.40 to win, with the draw 4.75 and the Hammers 7.00.

Welbeck concedes he was pleased with his team’s spirit on Sunday but admits that they will need to improve significantly if they are to seal a top four finish.

“We showed character but I think we have to look at the performance and see where we conceded the goals,” he told Sky Sports News.

“At this point of the season and the position we’re at, we know it’s not good enough for us and it wouldn’t be good for us to lose three points again. We dropped two and we’ve got to improve for next time.

“It’s two attacking teams who want to play with the ball. It was a good one for the neutrals to watch but both teams wanted to get three points.”