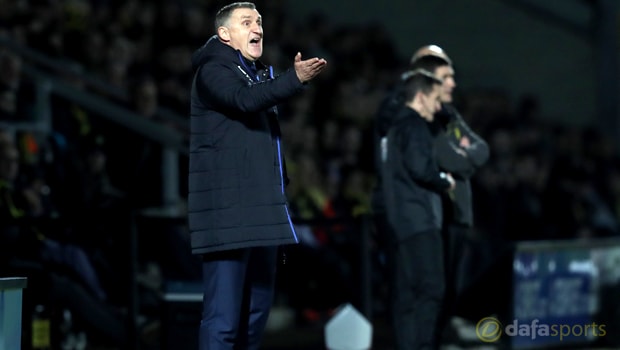 New Blackburn boss Tony Mowbray believes the 1-1 draw his side secured against Burton Albion on Friday night was the least they deserved.

The 53-year-old took charge of Rovers for the first time at the Pirelli Stadium after succeeding Owen Coyle as manager earlier this week.

Things got off to a positive start for Mowbray, as a Matt Palmer own-goal gave Blackburn the lead during the first half, but the Blue and Whites were denied all three points thanks to a superb strike from Marvin Sordell during the second period.

Mowbray believes the draw was the very least Blackburn deserved, particularly after their impressive first-half display.

“My dressing room is sitting there disappointed that they haven’t taken three points,” Mowbray said.

“We probably deserved more than a one-goal lead at half-time with the efforts that we had and the territorial advantage in the first half.”

The former Celtic coach was also quick to praise Burton for their second-half performance, particularly boss Nigel Clough who changed the Brewers shape during the half-time interval.

He added: “I think you have to give credit to Nigel Clough for changing his [team’s] shape, changing the direction of the football match.”

The point leaves Rovers second-bottom of the Championship standings, two points adrift of safety, while they have now only won one of their last seven league matches.

The Lancashire outfit will be hoping to return to winning ways when they play host to Derby County at Ewood Park on Tuesday night.