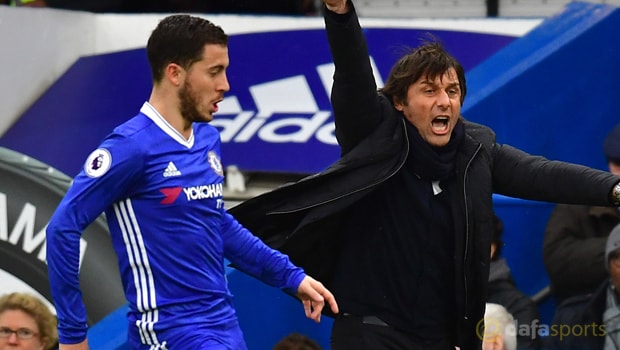 Chelsea manager Antonio Conte has once again refused to say the title race is over and has urged his team to pick up another 29 points.

The Blues moved 11 points clear of Manchester City on Saturday as they beat Swansea 3-1 at Stamford Bridge, although Spurs will get the chance to cut the gap when they host Stoke City on Sunday.

Goals from Cesc Fabregas, Pedro and Diego Costa helped them grab all three points as they moved closer to another Premier League crown, with their 12th successive victory at home.

The Citizens, Spurs, Arsenal, Liverpool and Manchester United all have a game in hand on Chelsea and Conte insists he will not let his guard down.

With 12 games left of the campaign, Conte believes his players will need to pick up a further 29 points.

He told Sky Sports: “Eleven points is not really 11 points because the other teams have to play. We need another 29 points to win the league and if we are able to take 29 points for sure we will win the title.

“But 29 points are a lot, and there are 12 games until the end. It’s important to go step by step, to continue to work and have the commitment of the players.

“Today we deserve to win the game, and we created many chances. It’s a pity about the goal we conceded but in the second half we started again.

“We deserved a lot to win this game and I’m very happy for my players.”

Chelsea take on West Ham United in their next game and the Blues are priced at 1.57 to win, with the draw 4.00, while the Hammers are available at odds of 5.50.