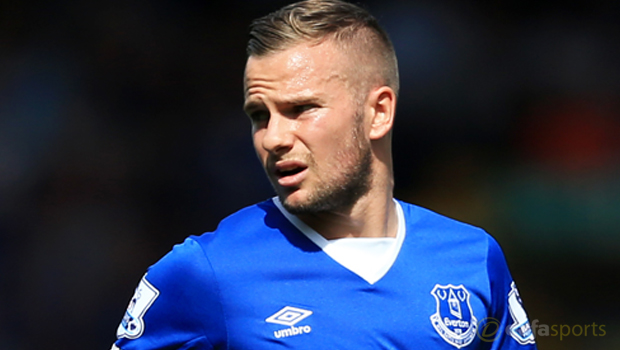 Tom Cleverley is confident that Everton will play European football next season and is eyeing a return to England colours for Euro 2016.

The 26-year-old is now closing in on a return to action, having been sidelined since August 29 when he picked up nasty ankle injury in the goalless draw with Tottenham.

In his absence, the north London outfit have prospered, with 15 points from nine Premier League matches to sit seventh in the top-flight standings after 13 games.

While a few of the usual suspects are ahead of them in the table, there are a couple of notable absentees, with Chelsea and Liverpool still playing catch up, but it seems likely that they will both be challenging for the Champions League places next May.

And while Europe’s elite club competition may be beyond Everton at the moment, Cleverley sees no reason why they should not maintain their form to play in Europe next term.

“The fixtures we have had so far and the results we’ve got from them shows there is no stopping us finishing in one of the European spots,”
he told the club’s website.

The Basingstoke-born midfielder has won 13 England caps to date but has not featured for the Three Lions since the 1-0 loss to Germany back in November 2013.

He was an unused substitute for the goalless draw with the Republic of Ireland last summer but is clearly hungry for more international action after getting a new lease of life since leaving Manchester United.

And, with places up for grabs in Roy Hodgson’s side for next summer’s showpiece, the former Aston Villa loan star now wants a decent run in the Toffees’ side to prove that he should be selected.

“It’s been playing on my mind for 10 or 11 weeks now while I’ve been out that I could have really got back in fold, but these things happen,” he added.

“I’ve just got to get my head down now and first of all get myself back in the Everton team and play well for Everton. Hopefully the England call can come as a result of doing that.”

Cleverley’s next chance to impress will be in Everton’s trip to Bournemouth on Saturday, with the Cherries priced at 2.80 to win and Roberto Martinez’s charges on offer at 2.50.