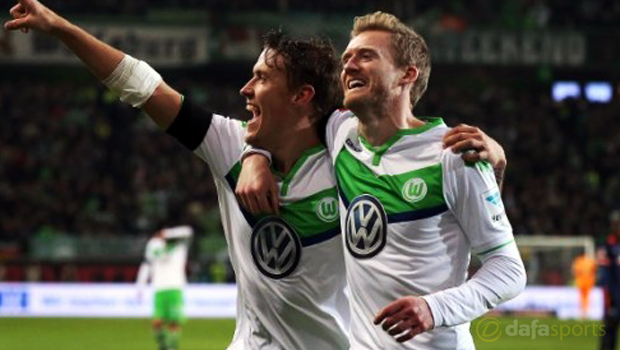 Andre Schurrle is confident Wolfsburg will qualify for the last 16 of the Champions League but knows they face a tough clash with CSKA Moscow on Wednesday.

Die Wolfe currently sit third in the Group B standings with six points to their name but there is little to choose between the teams, as PSV Eindhoven are just one place ahead but on the same number of points and Manchester United sit top of the table with just one more point to their name.

CSKA prop up the group but, with four points in the bank, still have every chance of progression with just two games to go.

Wednesday’s fixtures are crucial, with United hosting the Dutch giants and looking for the victory that will give them safe passage into the knock-out stage.

The Germans know that their continued participation in Europe’s elite club competition next year will depend on how they fare against the Muscovites and the Red Devils in their final game, and Schurrle sees no reason why they cannot achieve their aims.

“We’ve got every chance and we know now is when it matters and we have to get the points,” he told Spiegel TV.

“We know how tight it is and it’s going to be hard to go away to Moscow first, but we’ve got to play both our remaining games well. We can get something in Moscow then we can wrap things up at home.”

Moscow are priced at 2.60 for the win while Wolfsburg can be backed at 2.70 and the former Chelsea ace knows he and his team-mates must be at the top if their game to get the right result.

“They’ve got some good players – some quick players up front, and they are stronger at home, but we’ve got to play our own game and then it’s possible to get something,” added Schurrle.