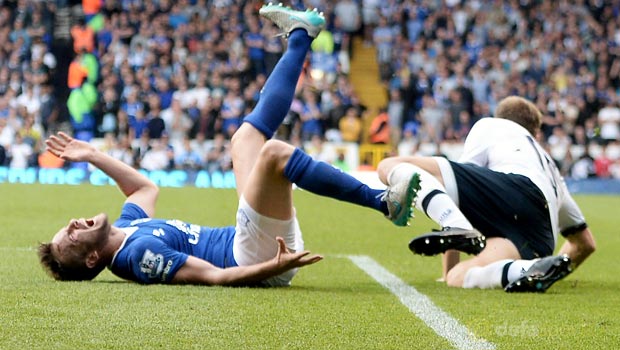 Everton have been hit with the news that summer signing Tom Cleverley’s injury will keep him out of the side for up to eight weeks.

The midfielder joined Roberto Martinez’s men in the summer from Manchester United, via a loan spell at Aston Villa, and was enjoying a new lease of life.

The 26-year-old picked up his injury after a clash with Eric Dier in the goalless draw with Spurs before the international break and, although initial fears that he had broken a bone turned out not to be true, he has damaged ankle ligaments and Martinez said he would miss “six to eight weeks”.

“Knowing Tom and how fit and strong he is, we’re looking at a six-week period,” he said.

Meanwhile, as the Saturday lunchtime showdown with Chelsea looms, Leighton Baines, who will miss the match with injury, has backed defender John Stones to come through the encounter unscathed.

The former Barnsley star was the subject of intense pressure from Chelsea over the summer as they tried to prise him away from Goodison Park with three unsuccessful bids.

In the end Stones put in a transfer request, which was turned down, but Baines says that will have no impact in the home dressing room and the player has the full support of the rest of the squad.

Baines told the website: “It’s John who has to pick himself up now, dust himself down and move forward, and we’ve supported him all the way through it as a club and inside the dressing room.

“I think there’s a misconception sometimes – people think that when a footballer hands in a transfer request they do it and go off and play a game of golf or whatever.

“But it’s actually been such a tough thing and, as a young lad, you do lean on other people a bit more for advice at these times.”