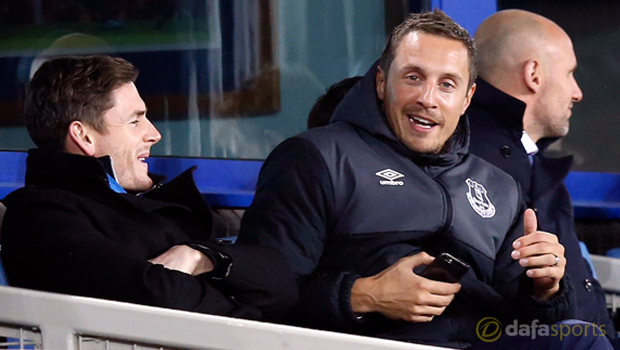 Everton enjoyed a routine passage into the fourth round of the FA Cup by beating Dagenham and Redbridge 2-0 at Goodison Park on Saturday.

It capped an excellent week of cup action for the Toffees, who were 2-1 victors against Manchester City in the Capital One Cup semi-final first leg on Wednesday night.

The high point for boss Roberto Martinez in Saturday’s win – which came courtesy of Arouna Kone’s first-half header and a late Kevin Mirallas penalty – was the return to first-team action of Phil Jagielka and Steven Pienaar.

Skipper Jagielka has been absent for two months, during which time Everton’s rearguard has been decidedly shaky, while Pienaar was back for the first time since April.

The Everton boss was clearly elated to see them back out on the pitch, fighting for the cause.

“There were many individuals that needed that game and the opportunity to show the intention of starting in the team,” said Martinez.

“It was fantastic to see Phil Jagielka back and showing no signs of rustiness.

“Steven Pienaar to me was the highlight of the afternoon; he has worked really hard to get fit and the warmth of the fans was a good moment. I expected him to play for an hour and he lasted longer.”

Martinez will be hoping his side can make it a cup hat-trick when they face Man City at the Etihad Stadium in midweek for a place at Wembley in the Capital One Final.

Everton have a precious lead to hang on to and, should they prevail, could face a Merseyside derby in the final with Liverpool having beaten Stoke 1-0 away from home in their first leg.

Everton are 5.00 to win the League Cup, with Liverpool currently the 2.10 favourites. Man City are priced at 2.75 while Stoke are the outsiders of the quartet at 17.00.