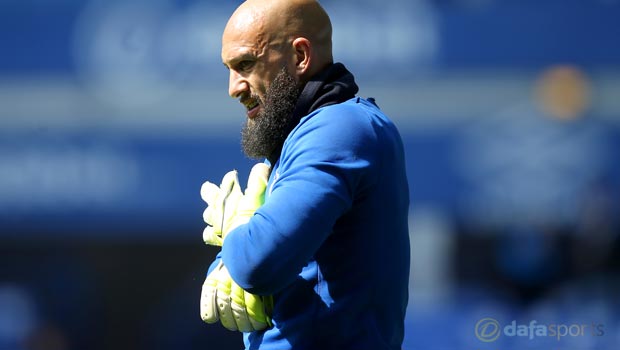 Tim Howard says that Everton must follow the example of Swansea and Birmingham from recent seasons by targeting victory in the Capital One Cup.

Everton begin their campaign with a trip to Barnsley on Wednesday night and according to the American, the League Cup is an “attainable” piece of silverware for the Toffees.

Howard has already won the competition during his time at Manchester United and he is challenging his teammates to become the first Everton side to land the trophy.

“We are always looking for success,” declared Howard. “We are still in the first month and it’s an opportunity to use our squad and get another win under our belts, so we are going to try to do that.

“But we realise that it’s a cup that’s attainable and we can win, so that will be our goal.”

With no European football to focus on this season, Howard is clearly intent on making a decent fist of the domestic cup competitions instead.

Alongside Swansea and Birmingham’s successes, Bradford and Cardiff City have appeared in finals in the last five years.

Howard says those achievements are proof that Everton should believe they can win but that it also serves to remind them they will not be alone in thinking they can win the trophy.

“It’s hard – only one team can win it every year,” Howard added. “I’m sure a lot of teams will have this conversation (about winning it).

“We try our best – we got to a cup final a few years ago and just fell short. But, until we win one (a trophy), the question will continue to get asked.