Ter Stegen believes he is the perfect fit 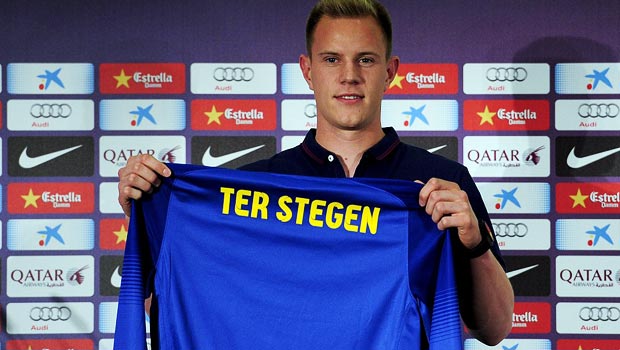 Ter Stegen was formally announced as a Barcelona player last week after a deal had been agreed with Borussia Monchengladbach for a fee of ?12million.

The 22-year-old will replace the outgoing Victor Valdes, who announced earlier last season that he would be heading for the exit when his deal expires in this summer.

The Germany international – who has not made the cut for Joachim Low’s World Cup squad – insists that he is very happy with the ball at his feet and expects to fit in nicely at the Camp Nou.

Ter Stegen said: “I think my strengths fit in well with the club.

“I do not think there is any other team that plays like Barca.

“I really like the way they play football and I think it fits perfectly with me and I want to show in the future.

“I think I’m a footballing goalkeeper that also takes some risks. This is my style, though nowadays I think it’s normal to take some risks.”

The Catalan side have been on the look-out for a new stopper all term and with Valdes injured for the closing stages of the campaign former boss Gerardo Martino was forced to look to the unreliable Jose Pinto.

Ter Stegen admits that he has some big boots to fill but believes that he will be able to settle in to the role once he gets the chance to link up with his new team mates.

He added: “[Valdes] has had phenomenal years here and has won many titles with Barcelona.

“It’s clear that he has left his mark.

“There’ll be a very different goalkeeper between the sticks but I hope to adapt well., that he has lived historical moments.”