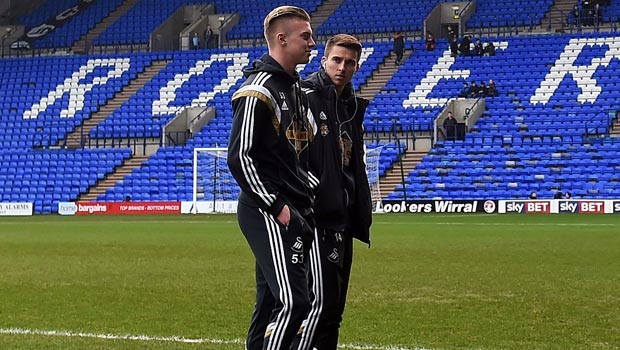 Swansea City’s loan midfielder Tom Carroll has admitted that he is already dreaming of a trip to Wembley after netting in the FA Cup win over Tranmere.

Carroll linked up with the Welsh club on a season-long loan deal over the summer and has since gone on to make nine appearances.

The 22-year-old is keen to continue his development and feels that the best place to be at the moment is away from parent club Tottenham.

The midfielder bagged his first goal for his new club over the weekend as Swansea coasted to a 6-2 win over the League Two outfit.

A brace from Bafetimbi Gomis along with strikes from Nathan Dyer, Wayne Routledge and Modou Barrow helped to ensure that there would be no giant-killing.

Although it is still early in the competition, Carroll admitted that he and the rest of his team-mates are eager to go all the way and enjoy a trip to Wembley at the end of the season.

Carroll said: “Every player is in the game to win trophies and there is so much history in the FA Cup, it’s a competition we would like to go far in.

“For me it would be a dream come true to play at Wembley and win the FA Cup. We won’t worry who we get in the fourth round. You have to beat the best if you want to do well.”

The Tottenham academy product insists that he is keen to kick on after bagging his first goal and hopes that he can tie down a regular starting spot.

He added: “I’ve been waiting a while for my goal and I got it today, so I’m delighted.

“When you get the opportunity you’ve got to take it and hopefully I’ve done that today and showed the manager [Garry Monk] what I can do.

“That’s where you get your confidence as well, getting that two, three, four games that you need to get into the flow.

“I’ve come here to play Premiership football, so I’d like to be playing in the next couple of games.”

Swansea can be backed at 2.31 to win their next Premier League game when they host West Ham who are 2.99 to take all three points at the Liberty Stadium.