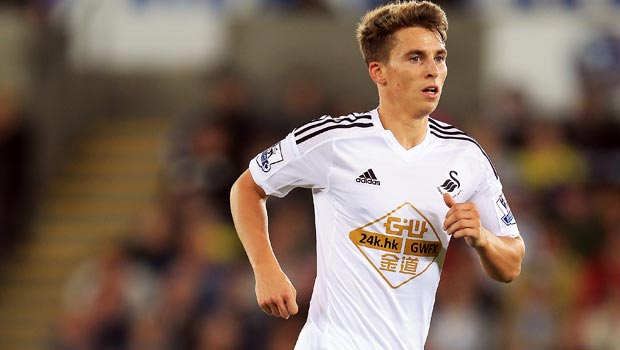 Swansea City midfielder Tom Carroll says the team are full of confidence ahead of Tuesday’s trip to Liverpool in the Capital One Cup.

The Swans ended a five-match winless run in the Premier League on Saturday night with a 2-0 victory over Leicester City at the Liberty Stadium.

The three points lifted Garry Monk’s side above Liverpool in the table as the Reds were held to a goalless draw at home by Hull City.

After getting back to winning ways over the weekend, on-loan Tottenham midfielder Carroll says Swansea will travel to Anfield believing they can beat the Reds.

“Tuesday is another big game for us,” he told the club’s official website. “It was a good performance from the lads on Saturday to get the win. We didn’t really get it going as much in the second half, but overall we deserved the win and it was nice to get back to winning ways.

“Playing against Liverpool at Anfield is always a tough ask, but we are confident and looking forward to it. They haven’t quite got going as well as they did last season but they have great players and I’m sure they will click soon.”

Swansea lifted the Capital One Cup in 2013 and booked their place in the fourth round with an impressive 3-0 victory over Everton.

Liverpool, who last won the trophy in 2012, needed an epic 14-13 penalty shootout to beat Middlesbrough in the last round but are unbeaten in the last four meetings with Swansea.

However, Brendan Rodgers’ side lost at home to Swansea at this stage of the Capital One Cup in October 2012 with the visitors from Wales winning 3-1 on that occasion.