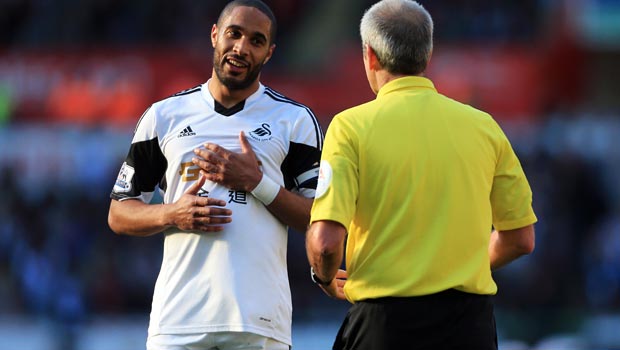 Ashley Williams is “ready to talk” if Napoli make an approach for him, according to the Swansea City captain’s agent.

Williams, 29, was linked with a move to the Serie A club this week with reports suggesting that Napoli coach Rafael Benitez was preparing to make an offer this summer after being impressed by the defender during the Italian club’s Europa League clashes with Swansea.

His agent, Peter Smith, says Williams could be tempted by a switch to an important club like the Partonopei.

However, he insists that talk of a move to Italy for the defender, who is under contract at the Liberty Stadium until June 2015, is just speculation at present.

“There has been talk of meetings with the club or with Rafa Benitez, but there’s no truth in that at the moment,” Smith told Napoli Calcio Live.

“Clearly we are talking about a great club with an international level manager, so we are ready to talk to Napoli if a call were to come.

“However, until the possibility becomes concrete, there’s no point talking about it.”

Williams was signed by Swansea from Stockport County in 2008 and, since the Welsh club were promoted to the Premier League in 2011, he has played an integral role in maintaining the club’s top-flight status.

The Wales international has 45 international caps and also captained Swansea to victory in the final of the League Cup last season.