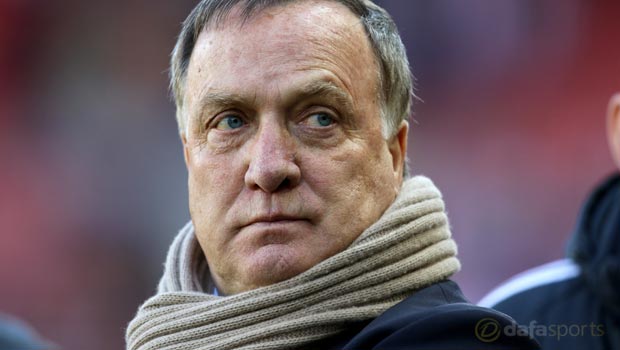 Manager Dick Advocaat has called on Sunderland’s supporters to remain firmly behind his side and drive them on towards Premier League safety.

The Dutchman was speaking after his first home game in charge of the Black Cats ended in a 1-0 derby win over Newcastle United, a result which lifted the Wearsiders three points clear of the relegation places.

The home faithful gave the players superb support throughout the 90 minutes which was highlighted by a superb match-winning volley from Jermain Defoe right on half-time.

And afterwards Advocaat called for a repeat performance for his side’s final three home league games of the campaign, the first of which comes next weekend when in-form Crystal Palace are the visitors.

He told reporters: “I’ve said it before, if you can get them behind you straight from the beginning then it will give you an extra boost.

“I’m really, really happy for the players and for the fans, because they deserved it as well. They were a real 12th man and I’m really happy about that.

“If they can keep doing this then we can give every opponent a very difficult time here.”

Victory on Sunday made it seven games undefeated against the Magpies, whose former manager, Alan Pardew, is now in charge of the Eagles.

And the Black Cats will be boosted by the memories of a 3-1 win at Selhurst Park earlier this season, while the last two meetings of the two sides at the Stadium of Light have ended goalless.

Sunderland are now 3.25 to be relegated at the end of the season.